I listen to a lot of NPR, it seems like every other story is about the “economic downturn” going on these days. California isn’t in good shape. I’m not holding my breath awaiting my state tax rebate check. But I’ve been told that the Four Corners Region, and Southwest Colorado specifically are weathering the storm much better than the rest of the country.

While reading the Durango Telegraph, the alt-weekly here in Durango yesterday I saw the headline “Colorado foreclosures tumble in ’08” and read about how the percentage of home foreclosures last year were down in the region which is an indicator that the economy isn’t suffering as bad as other parts of the country. You can read the full story here (about halfway down the page).

A few hours later I picked up the Durango Herald, the local daily and saw a very different headline: “Foreclosures in county hit record highs” talking about how home foreclosures last year were at an all time high. Here’s a link to the full story.

Two stories published just a day apart reporting on the same area with very different headlines. The Herald article appears to be talking in absolute numbers while the Telegraph article is talking in percentages. I haven’t figured out if one of the papers is misinterpreting the data or if the Telegraph thinks the glass is half full while the Herald thinks the same glass is half empty.

I wrote a letter to the editors of each paper, hopefully they can clarify things.

Anyone out there have any insight? If so leave a comment.

UPDATE: I heard back from the columnists of each story and it looks like in my confusion between the headlines I wasn’t reading the articles properly. The Telegraph story is talking about the state doing better than the rest of the country while the Herald article is talking about the county setting a record for forclosures. Two different ways to look at the same data.

I’m hoping that it will be less of a personal blog than this one and more about news and things going on relating to beer and bikes. It’ll probably be focused on the Durango, CO area but I’m sure there will be a lot of info about San Diego and other beer and bike regions and news.

The other reason I set it up is because I recently bought some web hosting and wanted to get my feet wet with hosting my own stuff. It seemed too daunting of a task to move this blog (and something I might screw up the first time) so I decided to come up with a new blog. Craft beer and bicycles are two of my biggest hobbies so it’s a perfect fit. I’m hoping to play around with all sorts of things you can do when you host a blog yourself rather than host it with wordpress.com (like this blog is).

So go on over to beernbikes.com and check it out. I’ll be cross posting personal stuff relating to beer and bikes to both blogs every once in a while. But go check it out and tell me what you think.

If you haven’t heard, Kinsee and I moved to Bayfield, Colorado! Kinsee grew up here and I’ve been anxious to get out of California for a while now. I don’t know when I fell in love with the Four Corners Region (probably around the time I discovered Edward Abbey) but Durango (the “big” city nearby) seems like the perfect place for me. Four breweries in Durango, one with a location in Bayfield, lots of cyclists and plenty of other outdoor enthusiasts, Durango seems like a good place.

I’m just getting settled in, but Kinsee’s already been blogging about what’s going on in Durango at her new blog, Durango Dirt.

The weather has been beautiful ever since we got here, I’ve heard that we’ll get more days of sun per year than San Diego (330 vs 300).

We went to Ska Brewing for the release of their new IPA Modus Hoperandi, not quite a West Coast IPA but not bad at all. Kinsee wrote about it here. One of my new favorite blogs, Beer at 6512 (the elevation in Durango) also was there. Turns out Durango has quite the blogger community because Hank at Songs From the Wood was there also.

I just got back from my first Colorado bike ride. I rode from our house in Bayfield to Ignacio and back. It was about 19 miles, mostly flat, but my sea-level-lungs need some adjustment to the altitude up here (we live at 6900 feet). When I left it was about 22F, I averaged 17.5mph and it had warmed up to almost 40F by the time I got back. And I did that on my fixed gear because my road bike is still in the shop getting assembled and tuned.

We’ve been here less than a week but so far so good. Once I get a little more settled in expect a lot more blog posts from me.

Today my moustache is turning one year old! It’s been exactly a year since I was last clean shaven — I only trimmed the moustache once in this past year, but other than that just a comb and wax is all that touches it.

A year ago I was in Puerto Iguazu Argentina. I was visiting the falls on the Argentine side one day, and going to the Brazilian side the next. While laying around the hostel that night between the two trips I got the bright idea to shave off my beard so later it would look like I’d been to Iguazu/Iguaçu Falls at two different times in my life. So I pulled out the razor and started shaving. Beards have come and gone in the past year, but that hair above my upper lip that we affectionately refer to as a moustache has been with me the whole time.

Below is a photo time line of the first year in my moustache’s life.

END_OF_DOCUMENT_TOKEN_TO_BE_REPLACED

There are all sorts of bars in La Mesa, the city I grew up in, that I’ve never been to. Places that I wondered about when underage, but just didn’t seem cool enough once I could get into bars. Last night Kinsee, Derrik and I rode our bikes to five of those La Mesa watering holes.

First up was Centifonti’s, I’ve walked past it a few times before and always assumed it was a restaurant or bakery, I was shocked when I saw a coupon in the Citybeat advertising their “Boot of Beer”.  Why a place like this serves a boot of beer is beyond me, but we weren’t concerned with that, we just wanted our 112oz of cold, foamy Stella Artois. I felt a little out of place at first, most of the patrons were older than the three of us combined, but as we drank the boot I stopped worrying about La Mesa folks and started having a good time.

Next up was Pete’s Place. Pete’s used to be one of two dive bars on La Mesa Blvd, but they both recently closed. Pete’s Place opened back up after some remodeling, Joe and Andy’s, the other dive hasn’t reopened yet. When tearing down the old walls they apparently found nice brick walls behind them, so Pete’s Place looks nice these days. Even though they got remodeled the bar tender said they still have the same people hanging out there and drink prices didn’t go up. $3.25 for a decently stiff whiskey and 7up was pretty good. 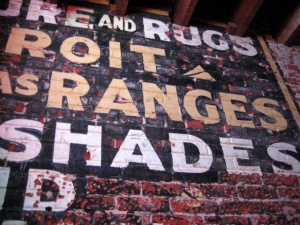 After Pete’s Place we rode down the street, passing such places as Hoffer’s Cigar Bar and the Turquoise Room at the Riviera Supper Club for the tried and true Falcon’s Lure. They only serve beer and wine but we found some good local brews. We played the jukebox (I resisted putting on Alice’s Restaurant, three times), met a local who showed us a magic trick, he originally wanted us to buy him a beer before showing us the magic behind it. When we showed no interest whatsoever he decided to tell us free of charge.

Bikes in the Bar

We sprinted down University Ave to The Dragon Room at Wong’s Golden Palace. This was the most divey, and least fun bar of the night. We walked in and it was almost silent, no music was playing, and nearly dark. No one was behind the bar so I asked a guy sitting there if he’d seen a bartender around recently. He looked at me and laughed and said “nah”. Then he started yelling “MEATLOAF! MEATLOAF!”, shortly after that the bartender started walking over. We didn’t feel comfortable ordering drinks from someone that responds to the name Meatloaf so we went into the restaurant and order our Flaming Volcano drink. We downed the drink and got out as quickly as we could.

Last was Mr G’s Tavern. It was bright with loud but not too loud music and a decent crowd. One patron was apparently trying to make fun of us and our bikes but I didn’t let him get away with it.

Him: “So you guys ten-speeded in here huh?”

We quickly became friends with him and another regular named Tim. By the time we left we’d earned his respect by riding around the hills of La Mesa with only one gear.

A Few of the Regulars -- We met Tim 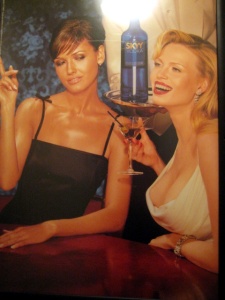 A Couple of the Other Regulars